How many times have you heard the phrase “The book was better.”? If you’re a friend of readers, then I’m sure it’s been more than a couple of times. As someone who loves both books and movies, it’s frustrating that sometimes it feels like I have to choose. I can either enjoy the book or the movie (which ever is consumed first), but not both.

I recently read The Curious Case of Benjamin Button (via DailyLit) and I’m still looking forward to the movie and I doubt the movie will diminish my opinion. The reason being, the movie is WAY different to the story (and much longer). I can tell this from watching the trailer, and because I knew of the film first, and was excited about the film (you rock, David Fincher), I read the short story out of curiosity.

C claims he never finished The Hitchhikers Guide to the Galaxy books because he watched the movie while still reading the book, and that ruined it for him. Things like Zaphod’s heads etc. Small inconcistencies.

I have another friend (we shall call him “Denmark”, because, well, that’s actually what we call him) who refuses to watch a movie unless he’s read the book. Or, if he watched the film first, he won’t read the book at all. So for him, it’s about priorities. If it’s not his kind of book (like Benjamin Button), he can take it or le 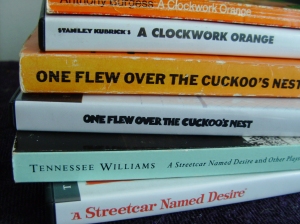 ave it, and enjoy the movie.

I prefer reading the book first, but with some, I just don’t care. I hear Slumdog Millionaire is based on a book. I may read the book one day, I may not. But wild horses couldn’t keep me from watching that movie.

Does it depend on what is more important to you? Do you have to pick a favourite in your love triangle with books and their adaptations?

I am slowly and sadly resigning myself to the conclusion that there just is no right or wrong (how many arguments end this way?). I give two examples:

Before watching A Clockwork Orange, I read the book, frequently paging to the glossary at the back. In the movie, there was no glossary. So reading the book first helped me understand the movie better. And, often, having read the book helps one understand the characters and their motivations so that you don’t feel lost. Which frequently happens if you are not familiar with the source material.

However, I watched One Flew Over the Cuckoo’s Nest before reading the book. This allowed me to be surprised by the ending in the movie, which is not a surprise in the book.

Perhaps it’s also a prestige issue. If David Fincher takes some short story which is not nearly as famous as The Great Gatsby, but turns it into an Oscar nominated movie, is that somehow okay? But if some unknown director decides to take a much loved book and try to turn a profit on the book’s success, is that less okay? Surely it’s all done for profit and prestige.

Is this true for any movie based on something else? What about movies based on graphic novels? Epic poems? TV shows? Games? Other movies?

So my conclusion is, I suppose, that it depends on the situation. A cop out, I know. But I do lean toward reading the book first, if I have the opportunity to, because then I would catch all those references in the movie. So for a richer experience, I think the book is better. Just learn to not judge the movie by the standards of the book.

So, if you’re sitting in a darkened movie theatre one day and as the credits roll up you hear a whisper “The book was better, but this was good too.” That may just be me.

8 thoughts on “The great debate: book or movie?”