Where Wings shows the power of telling a simple story well, Cimarron suffers from trying to tell too much. 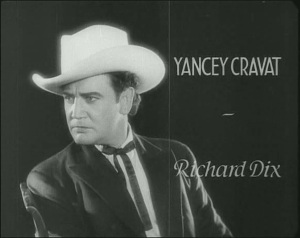 At its heart, it’s a western about a man who tries to be good despite being in the lawless wild west. Its echoes can be seen in most western movies and TV shows today. The one that jumped at me immediately was Deadwood.

This would-be epic just couldn’t get a grip on pacing. It’s based on a novel (by Edna Ferber), so you can understand that the screenwriter tried to squeeze as much story in as possible, but there are massive time jumps that I found jarring: 1889, 1898, 1903, 1907 and 1929. Also, by not focusing on the motivations of the main characters (just their actions) the film loses its heart.

Yancey seems flighty and unreliable – disappearing on his family for five years and it’s never really explained. He could be a beautifully tragic figure – a man whose idealism and fierce desire for self-reliance frays his relationships with his family – but instead he just seems like a selfish narcissist. The actor playing Yancey, though, does have a glorious voice. The invention of talking pictures came just in time for you, good sir.

eels simultaneously progressive and also so very, very not. Yancey’s character is a big supporter of native American rights, which is not something I can even remember being a conversation in recent movies. Sabra is also given a women’s rights boost by running the newspaper when her husband disappears, and being elected a congresswoman when she’s older. There’s also a Jewish character who becomes good friends with the family, and it’s the first best picture winner I’ve seen with a person of colour in the opening credits. Although he’s mentioned last and depicted as polishing shoes. It’s… something, right? I mean this was 84 years ago.

That being said, Yancey and Sabra’s daughter is an incredible brat who, despite her mother’s example, sets out to marry the richest man in town (without the character study that gives characters like Scarlett O’Hara sympathy) and the way the films deal with the one black character is disappointingly unsurprising. He’s a goofy kid who idolises Yancey and is expendable enough to die when trying to save Yancey’s son, which he doesn’t even get a chance to do. But I will say, his death was given some heft – it’s the only part in the film where I cried.

One thing this film did do was explain why the hell the wild west was so wild. As a non-American, I’d just always taken the whole thing for granted, never questioning the time period. This film lays it out: in 1889, unoccupied land was made available for purchase, so these sparsely populated regions were little towns on the verge of creation.

*Yancey Cravat is possibly the greatest character name in a movie ever. It’s the kind of pseudonym characters in a sitcom use when they’re crashing a fancy ball.

Bottom line: I’d hesitate to recommend this one too highly. It has its moments, but, sadly, probably isn’t worth two hours of your time.