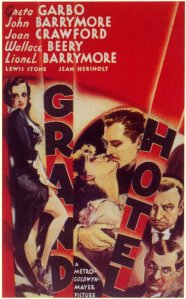 Other nominees:
Arrowsmith
Bad Girl
The Champ
Five Star Final
One Hour With You
Shanghai Express
The Smiling Lieutenant

A few seconds into Grand Hotel, as I watched the opening credits, I thought this is the kind of film I was waiting for in this odyssey. It’s everything I expected from an old best picture winner: a cast of names I recognised, quick-fire dialogue, a glamorous setting… I guess one couldn’t really expect less from Thalberg-era MGM. (I’d highly recommend the MGM series of podcasts from Karina Longworth’s You Must Remember This)

While the title is not as well known as something like All Quiet on the Western Front (the only film so far I had seen already), all of the five stars were icons. I’m wary of saying something like “the first big ensemble picture” because I haven’t done the requisite research, but it’s the first one I’ve encountered in my limited exploration of old films. The format is more like a series of vignettes, rather than one linear story that follows a central character, although it’s not as fractured as something like Four Rooms.

It’s fizzier, slicker and more fun than any of the others I’ve watched so far, although the climax feels darker than necessary. I feel like this film has the sort of production quality and atmosphere Broadway Melody was aiming at. Which is interesting, considering that Broadway Melody, also an MGM picture, was written by none other than Grand Hotel’s director Edmund Goulding (who sounds like a very interesting guy).

It’s packed full of likable characters like the slick-as-hell Baron played by John Barrymore and the endearingly fragile Grusinskaya played by Greta Garbo. I feel like I should like Joan Crawford’s stenographer, and maybe it’s just the Mommie Dearest thing, but I found her slightly offputting. She’s elegant as all get-out, but her hooded eyes, perma-sneer and the way she stuck herself out at weird angles didn’t sit well with me.

But the star power in this film is just astounding. Greta Garbo was, of course, already very famous at this time (to the point where her contract stipulated she get top billing, even in an ensemble picture like this), Joan Crawford was continuing her star trajectory and the Barrymore brothers were part of a successful film dynasty.

I only knew Wallace Beery’s name, I’m afraid, from Barton Fink but I was quite surprised to discover he won best actor at the same ceremony where Grand Hotel won best picture… for The Champ. He was also the only member of the cast to attempt an accent.

Lionel Barrymore was also a delight – he wasn’t quite as dominant a force in the 1930s as Clark “King of Hollywood” Gable, but he was definitely in a lot of famous and well regarded films of this period (David Copperfield, Saratoga, You Can’t Take It With You). Lionel Barrymore is also responsible for the most emotional scene – Kringelein standing up to his awful employer, Mr Preysing.

Bottom line: If you love the glamour of old Hollywood, this one is definitely worth your time.

Here’s the rest in the series.