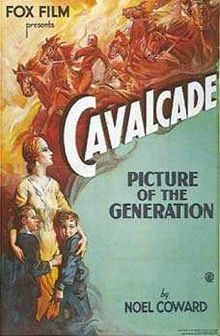 Other nominees:
42nd Street
A Farewell to Arms
I Am a Fugitive From a Chain Gang
Lady for a Day
Little Women
The Private Life of Henry VIII
She Done Him Wrong
Smilin’ Through
State Fair 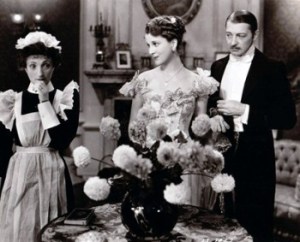 Synopsis: The story follows two English families (one wealthy, one not) from New Year’s Eve 1899 to New Year’s Day 1933, through events like the Boer War, the sinking of the Titanic and the First World War.

Based on a Noel Coward play, Cavalcade starts with The Boer War, and the beginning takes place in one house – the families we learn of are the Marryotts, who are the homeowners, and the Bridgeses, who are servants.

It serves as a very interesting time capsule, when most movies had at least a few musical numbers (this may well be in the play. I wouldn’t know).

This film has the old-fashioned charm we expect from movies like this, and there’s a sweet banter between couples. The accents are also wonderful. The staff somehow manage to stretch the word “war” into two syllables, and add haitches to words like “Oxford”.

It has some incredible shots – the men sailing off to the war, linking arms and singing. The most haunting, probably, is the scene of a young girl in a white dress, dancing down the street while, unbeknownst to her, her father lies dying not far away.

The WWI montage is quite good; it blends soldiers going off with soldiers dying and recruitment songs to the backdrop of marching soldiers and A Long Way to Tipperary.

The Titanic scene is particularly sad, but it’s beautifully self contained.

The characters are mostly likable (barring a few brats and drunkards). Robert, the Marryott patriarch, is dashing and Jane, his wife, has a tragic dignity that earned Diana Wynyard an Oscar nomination. She lost out to Katharine Hepburn but… doesn’t everyone?

Rather than focusing on one couple, the perspective shifts from the Marryotts to the Bridgeses to the next generation of Marryotts.

This was the first year where I’d been aware of a few of the other nominees: 42nd Street contains one of my favourite songs from this decade, and I had actually seen She Done Him Wrong. As a movie, She Done Him Wrong is utterly bonkers and not particularly great, but it contains Mae West and Cary Grant, and it’s barely over an hour long, so how can you not?

The bottom line: It’s enjoyable enough, but probably not an essential one. Watch it in a double bill with She Done Him Wrong for a fascinating contrast.

Find the rest of the series here.